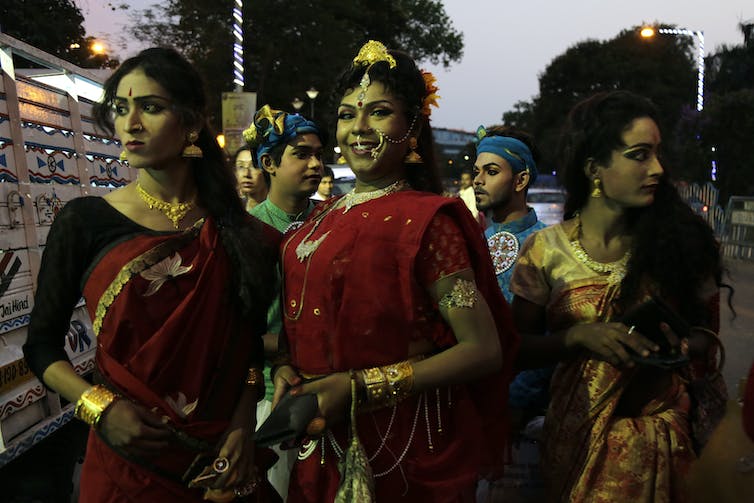 “Our court, our justice system, really believes in the rights of the people,” said Kalyani Subramanyam, program director for the Naz Foundation, the primary petitioner in the court case, which could open the door to gay marriage.

And the ruling is more than a human rights win. It is also a restoration of ancient Indian sexual norms.

India, homosexuality and the ‘third gender’

In that way, India’s ruling differs from recent court decisions legalizing gay marriage in Colombia, Taiwan and Germany – though for LGBTQ Indians, the impacts may be similarly life-changing.

Sexual and gender minorities in India are regularly harassed, assaulted and jailed.

Yet many gender researchers who study India – myself included – argue that India’s religious and cultural heritage has long been more accommodating to multiple gender and sexual expressions than Western societies.

According to scholars Ruth Vanita and Saleem Kidwai’s groundbreaking 2000 essay collection on same-sex love in India, Hindus embraced a range of thinking on gender and sexuality as far back as the Vedic period, around 4000 B.C.

Hinduism’s first sacred texts tell stories of same-sex love and gender-morphing figures. The Hindu deity Shiva is sometimes worshipped as a multi-gendered figure composed of Shiva and his wife Parvati together, in what’s known as his Ardhanarishvara form.

Hindu texts from around 1500 B.C. likewise show that the “third gender” – individuals sometimes called “hijras,” who do not fit into the categories of man or woman – were integrated into India’s political and social life.

“Male-male attraction” is also “one of the themes of pre-colonial Urdu poetry” writes Vanita in her book about Indian Islamic literature from the 18th and 19th centuries.

Some scholars of Islam, India’s second-largest religion, also find acceptance of gender fluidity in the Koran, which says that Allah “shapes you in the wombs as He pleases.”

Indeed, in India’s 16th-century Mughal courts, hijras and eunuchs often held positions of high esteem as advisers or emissaries between men and women.

The British preferred the binary

As the British empire grew more powerful in the Indian subcontinent in the early 19th century, so did their ideas about culture, society and law. Viewing local notions of sexuality as barbaric, British officials imposed Western, Judeo-Christian sexual norms on colonial subjects.

Before the British, homosexuality was not illegal in India.

But by 1861 the British had consolidated their rule over India and were enforcing Section 377 of their penal code, which could punish those who committed sodomy or other homosexual acts with life in prison.

When India gained its independence in 1947, this statute remained, becoming Section 377 of the Indian Penal Code.

India was not the only British colony where formerly acceptable sexual behaviors and identities became criminalized.

Section 377, or a similar statute, was imposed in 42 former colonies, including Pakistan, Bangladesh and Sri Lanka. Nepal, which was never formally colonized by Great Britain, also adopted anti-sodomy laws based on India’s British-influenced penal code.

Neighboring Pakistan, like former British colonies Bhutan, Uganda and Singapore, still criminalizes homosexuality under Section 377. This “unnatural offense” is punishable with up to 10 years in prison.

But in 2018, Pakistan, a Muslim-majority country, passed the historic Transgender Persons (Protection of Rights) Act, allowing Pakistanis to choose their gender on government documents and prohibits discrimination in employment and public accommodations on the basis of gender identity.

The future of gay rights in India

Despite India’s legalization of gay sex, the path toward full acceptance of LGBTQ rights is complicated.

For more than a decade, India’s right-wing Hindu nationalists – who espouse a fundamentalist interpretation of Hinduism called Hindutva – have worked to portray homosexuality as a reprehensible Western import.

Prime Minister Narendra Modi, a Hindu nationalist elected in 2014, is himself a follower of Hindutva.

In July, as India’s Supreme Court was preparing to hear arguments on the gay sex ban, Subramanian Swamy, a high-ranking member of Modi’s ruling Bharatiya Janata Party, retorted that homosexuality “is not a normal thing.”

It’s “against Hindutva,” he said.

After the ruling against Section 377, an armed Hindu nationalist group called the Rashtriya Swayamsevak Sangh declared that “same-sex marriages and relations are not in consonance with nature.”

Traditionally,“ read the Sept. 8 public statement, “Indian society has not supported such relations.”

“India’s pre-colonial sexual history is important,” Chaitanya Lakkimsetti, a Texas A&M professor who was involved in the fight to end Section 377, told me.

Yet, she reflects, “This is not just about hearkening back in time.”

For Lakkimsetti, the legal victory shows that “the Indian constitution is a living document that protects minorities.” In legalizing gay sex, then, the Supreme Court is not just recognizing India’s rich past – it’s also “looking forward.”