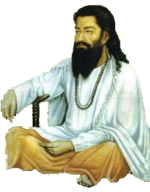 Guru Ravidas is a revered Indian poet-saint of 15th century. He was also a social reformer. He fought social divisions under the Hindu caste system, and gender equality. He was born in a family that worked with dead animals’ skin removal to produce leather, and thus belonged to the “untouchable caste”. He is much revered in the Sikh scriptures where his poetry is included in the Sikh holy book Adi Granth.